It’s hard to believe when you are in the mountains of Laos or cruising on the Mekong and Nam Ou rivers that this beautiful country was anything other than peaceful and is the most heavily bombed country in the world. If one digs a little deeper, or spends some time in the countryside, it’s recent tragic past will start to uncover. You will start to notice flower containers, water pots, benches, and household items made from old bomb casings. Take a close up look and you will see “United States” and a year (usually 1968 or 1969) engraved on the rusting metal casing. The most obvious question is “weren’t we at war with Vietnam?”. 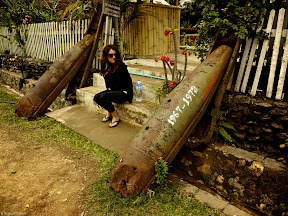 Due to Laos’s unfortunate location next to Vietnam it got pulled into the debacle of the Vietnam war, even though it was a neutral country. Communist leaders in both Vietnam and Laos infiltrated the countryside and built a huge road linking China with Vietnam called the Ho Chi Minh trail. The trail went right through Laos and enabled the Viet Cong and Northern Vietnamese army to transport soldiers, food, ammunitions, and basically anything it wanted to its troops. In a climate of eroding public confidence with the Vietnam war, the United States government feared that if the American public found out it was bombing a peaceful country like Laos, it would be the last straw, and public opinion would shift heavily against the war. It was decided that bombing would remain essentially a secret until it was uncovered in 1970. 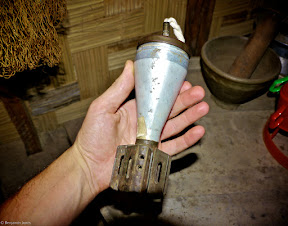 Between 1964 and 1973 the United States flew 580,000 bombing missions over Laos, thats one for every 8 minutes, 24 hours a day for 9 straight years! 30% of those bombs failed to detonate and over 50,000 people have been killed or permanently injured as a result of Unexploded Ordinances (UXO). 40% have been children.

25% of the villages in Laos are still contaminated by UXO and hiking on anything other than well marked paths can be deadly. Villagers injure or kill themselves while farming, hiking, searching for scrap metal to sell, while children often find UXO and play with it unaware of its dangers. People are injured and killed every year by bombs that failed to explode over 40 years ago.

It’s not all doom and gloom though, and we met some people that are doing great work, educating villagers on the dangers of UXO and clearing the countryside. The non-profits Mines Advisory Group and Legacies of War are doing wonderful work and we checked out a progressive museum called the COPE Museum in Vientiane, had some really well presented exhibits. COPE’s efforts is to provide prosthetic limbs to victims of the UXOs and teach them how to live, work, and function in a new way. They also educate villagers on how to avoid contact with UXOs. While in Vientianne we were able to buy bracelets made from UXOs by an organization that trains villagers how to safely recycle the scrap metal from bombs and cast it into jewelry and silverware….metamorphosis. 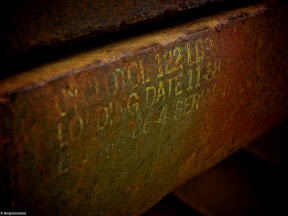 America is the largest funder of the non-profits who work in Laos and rightfully so. The US Congress approved $9 million to be spent in 2012 for clearing UXO in Laos. In January a Japanese made $1 million bomb clearing vehicle arrived in Laos ready to work. It is all so frustratingly backwards though, and it is obvious there was no forethought by the Generals who ordered these missions of the repercussions it would have on future generations. No matter how many millions of dollars the United States throws at the problem, they will never be able to undo the suffering caused. 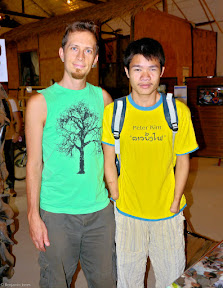 We met 19 year old Peter Kim at the COPE museum in Vientianne, who had lost both hands and his eyes and now works to educate local people on the dangers of UXOs and to raise awareness globally of this important issue. Since his injury he has taken up breakdancing and showed us a video of his performance at a benefit put on by COPE. He was friendly and charming even telling Shana how beautiful she was even though he is blind (-: We talked about our vastly different lives but still felt a bond between us. It brought up a lot of confused feelings for me. Here was an innocent person who happened to stumble upon something that our parent’s generation had dropped on his “neutral” country decades ago. Even though Shana or I didn’t have anything to do with the Vietnam War and its consequences, because it was done in our name, for our supposed “freedom”, it was hard not to feel guilty for the sins of our country. Peter however, showed no hint of animosity towards us Americans and we vowed to keep in touch. As I left the museum I was overwhelmed by feelings of anger and sadness at the sheer wrongness of it all…

Nothing could be done to make things better but at least there were a few good people like Peter Kim and the non-profits who were trying to right the wrongs made by previous generations and making sure they didn’t happen again.